Studio City is a neighborhood in the city of Los Angeles, California, in the San Fernando Valley. It is named after the studio lot that was established in the area by film producer Mack Sennett in 1927, now known as CBS Studio Center. 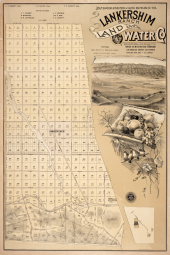 Map of the Lankershim Ranch properties, 1887

Originally known as Laurelwood, the area Studio City occupies was formerly part of Rancho Ex-Mission San Fernando. This land changed hands several times during the late 19th Century and was eventually owned by James Boon Lankershim (1850–1931), and eight other developers who organized the Lankershim Ranch Land and Water Company. In 1899, however, the area lost most water rights to Los Angeles and therefore subdivision and sale of land for farming became untenable.[1]

Construction of the Los Angeles Aqueduct began in 1908 and water reached the San Fernando Valley in November, 1913. Real estate boomed, and a syndicate led by Harry Chandler, business manager of the Los Angeles Times, with Hobart Johnstone Whitley, Isaac Van Nuys, and James Boon Lankershim acquired the remaining 47,500 acres (192 km2) of the southern half of the former Mission lands—everything west of the Lankershim town limits and south of present-day Roscoe Boulevard excepting the Rancho Encino. Whitley platted the area of present-day Studio City from portions of the existing town of Lankershim as well as the eastern part of the new acquisition.[2]

In 1927, Mack Sennett began building a new studio on 20 acres donated by the land developer.[3] The area around the studio was named Studio City.[4]

Find a Home in Studio City

See All Neighborhoods
Based on information from CRISNet MLS as of Aug 4, 2020 4:46:pm. All data, including all measurements and calculations of area, is obtained from various sources and has not been, and will not be, verified by broker or MLS. All information should be independently reviewed and verified for accuracy. Properties may or may not be listed by the office/agent presenting the information.